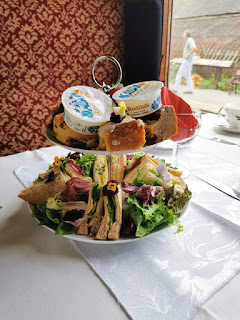 Passenger numbers have been very pleasing since we opened but today capped it as the busiest as were officially fully booked on every train. Not bad considering this is after another coach has been added! There were various things going on aboard too, with the Catering Dept in full flow firstly doing our first ever Savoury Sharer platters for a coach party who came on a heritage bus. The platters were officially supposed to be on Tuesdays but can't take place as we haven't reopened on Tuesdays after lockdown but the coach company had specially arranged these. It seemed to go down well! In addition, on the following train, there were our Luxury Afternoon Teas. These are always popular and we have added some extra capacity next Saturday by doing two "sittings", the usual one at 15:15 and an earlier one at 11:15 too. These are available to book online. In addition to all of these, an events company client was running a fish and chip special on board too!

A few people were down the yard but I have been so engrossed in the running of the the reasons I must admit the exact details of their activities have passed me by.

Leigh
Posted by Leigh Gration at 18:34