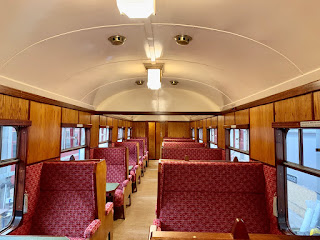 A reasonable day on the trains for the time of year. We're only running weekends this month as it is early season still and the next operating weekend sees our Multiple Memories Railcar Gala with the first passenger outing for Class 121 W55034 on our line.

A plethora of engineers were down in the maintenance area, with the wiring being declared complete on the newly restored LMS BTO which is due to enter service soon. Photograph attached of the stunning restoration of the inside.

The Class 73 was awoken from it's winter slumber and checked over ahead of the Diesel Gala next month. The event is the only planned appearance of this locomotive this season as the team wish to continue with the restoration which began before it even arrived with us. The locomotive also suffers from a leaking fibreglass roof which needs to be corrected. The opportunity was taken to dig out and do a Fitness to Run examination on the box van which will be used to recreate typical DMU tail load traffic at next weekend's event.

Leigh
Posted by Leigh Gration at 08:49