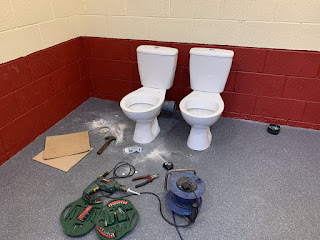 Another wet day in the valley saw Henry Ellison prepared for tomorrow's book launch. The book has been written by the late Vince Morris and his colleagues and so is appropriately been launched here. Apparently the television may be coming so the brass bits have had an extra polish. A start was also made on deconstructing No3 for exploratory work on it's overhaul.

The new toilet project has taken a leap forward. We're not quite flushed with success just yet but good progress for one day. Following a delivery of components yesterday, the first couple of toilets have been installed in the Gents. The attached photo was taken at lunch time but there has been more progress this afternoon as the waste pipes have been plumbed into the toilets and a start has been made on running the fresh water too. It is surprising how much there is in somewhere like that with waste and fresh water plumbing for toilets, sinks, urinals etc as well as electric for a hot water boiler and hand dryers. On top of that I guess it is most important to construct cubicles too! I did want to take an end of day photo but I couldn't get in so maybe tomorrow.

The Santa train was taken for a spin this morning as all vehicles have been under maintenance recently with one of them being lifted too.

Leigh
Posted by Leigh Gration at 16:11