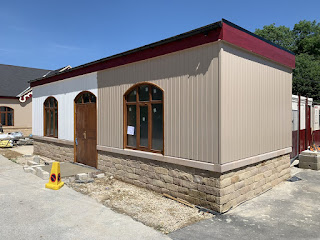 It looks as though we have had to wait until the end of June for the sun to come out but hopefully just in time for the Bus Rally on Sunday. Today's service saw reasonable passenger numbers for a out-of-holiday Thursday which was supported by the buffet who saw immediately raised ice cream sales.

Yet more shunting took place earlier to prepare for the weekend including clearing the incline of stabled vehicles ready for service, moving 31601 to the pit for a brake block change and hiding the works train out of the way for weekend service too. The Class 14, with it's recently replaced cylinder head, was moved out of the way of steam operations too. The Class 33 was fuelled ready for service next week and the 73 positioned ready for tomorrow evening's dining train. In amongst this, the Standard 2 was coaled up ready for the weekend.

Lots of work around the new building took place today as a grand tidy up post removal of the harris fencing took place and concrete entrance ways were poured to allow wheelchairs and buggies step-free entry. John was busy painting the exterior of the toilet block.

The PW were still in the yard continuing to install the new siding which will apparently become road 5 in the grand plan. It will go as far as it can do for now as to extend it to its full length will require some levelling of the terrain.

Leigh
Posted by Leigh Gration at 18:32