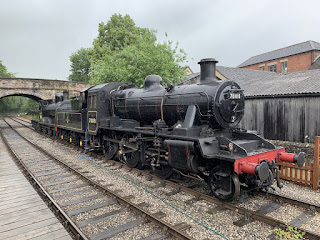 You could easily forget it is June as more heavy rain battered the railway today. Fortunately there doesn't appear to be any flooding issues in the valley which is good. Today's DMU service had a coach party who enjoyed a return journey as well as a light lunch in the Station Café. Thank you to those who assisted with that.

Today was the first day of prep for the upcoming gala weekend. The coach rakes were reformed to create two rakes of Mark 1s (with the aid of a DMU centre car). Both 78018 and 52322 were shunted to the watering point to make sure they were filled ready for service. They were also both loaded full of coal. A warming fire was then placed in 78018 ready for a steam test tomorrow.

The PW declared the newly installed point in the yard fit to drive over as they finished levelled and packing it.

Leigh
Posted by Leigh Gration at 18:34