It is weird to think that a month ago I was gearing up to see in the New Year by watching Madness on the tele. It wasn't as cold then as it is now! It was -8 this morning on the drive in so it wasn't surprising that numbers were thin on the ground today.

Some work continued in the Guards compartment of the BSK(K) and also in the Derby Lightweight trailer but it was too cold for being out for long.

The contractors stuck at it alongside a few volunteers on the new Station Build project.

The S&T dept did their routine FPL inspections as it is too cold to paint Shottle Box.

Leigh
Posted by Leigh Gration at 18:00

Dear All,
Light on the ground today but plenty done! 33103 had it's injectors changed and tapper clearance checks completed. Joe managed to complete the very drawn out task of fixing 55006's No 2 vacuum cylinder, now ready to be refitted to the vehicle. A single lightweight member was in working on the Air and Axle indicator panels. And Brian was in steaming his life away on many dirty objects that needed cleaning.
At the other end of the line Leigh was training up half the Duffield booking office clerks on how to use the new till system, which will be launched with the new online ticket system this Friday.
Attached is a photo of 33103 ticking over on the pit after today's maintenance.
Regards
Oliver Hodgkinson 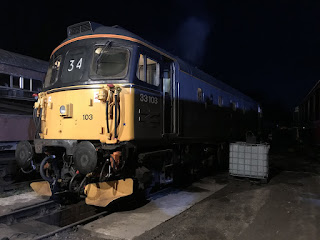 Dear All,
Well here I am for a second Saturday in a row as Responsible Officer. I must be doing something right?
It has been a day dominated by fabrication and painting by various groups. It was also good to see Mr Nesbitt back in Wirksworth after a recent illness.
In the shed area Fraday had its electrical box undercoated. Not far from there the 8f group were making more hoops for the Duke's boiler cladding. I've learnt today that these items are called crinolines. Another of their number was engaged in turning safely valve parts.
The DMU group continued with panelling in 53599. The Lightweight contingent pressed on with the fabrication of the air and axel panel. Including experimentation with incandescent and LED lighting.
A start was made on a B4 exam on 33 103. Pictured here is the engine room with the engine rocker covers removed.
Meanwhile at the other end of the yard an artistic moment was being had in BSK M34625. Several parts in the guards area were painted.
Across from there the LMSCA continued building the BTK interior.
All good progress. Thanks to all.
Regards
John Stokes.
PS. We so far have 4 buses attending the Bus Rally (30th June). If you have a bus or know of someone who might be interested. The entry form can be found here.
https://www.e-v-r.com/busbooking/

Dear all,
A quiet day with a handful of people working down the yard. One team rehung the corridor end door on centre car 59303 which had been taken off for toilet leak investigations. This is a harder task than it sounds! Another team made a start on gathering materials required to reinstall the two vehicle-end windows on the Class 108 following the renewal of the metal work. The buffers and draw gear will be reinstated next week to move this project forward even further. James has been working his way through making the wooden panelling for the inside of the Guards van to replace the panels that were beyond reuse when removed.
Leigh
Posted by Leigh Gration at 15:53 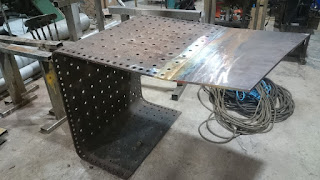 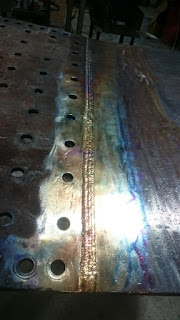 Dear all,
Another chilly start to the day saw the PW team travelling by Land Rover today rather than works train to their possession. It was lighter duties today after doing 11 sleepers in frozen conditions yesterday. A small S&T team performed ground frame maintenance at Wirksworth, including adjusting the FPL on the Wash Green frame to make it easier to operate.
The maintenance team worked on putting a temporary ceiling under the toilet tank in 59303. The tank is leaking but the vehicle is needed in service soon soon so it will be attended to at a later date.
Look out for our brand new online shop coming soon! We'll have a special launch promotion which we will share with you here for purchases made online in February to celebrate.
I attach a couple of photographs forwarded to me of Carthryn's boiler down at the repair shop.
Leigh
Posted by Leigh Gration at 15:41 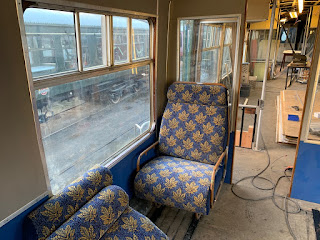 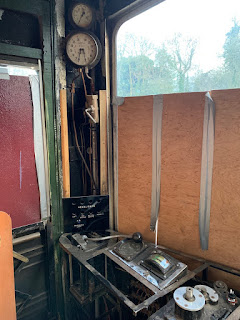 A much quieter day than yesterday it seems. One team spent the day tidying the car park making small inroads into this task. It is amazing how much stuff can accumulate in a short space of time. The other two worked on the Derby Lightweight trailer car which seems to be making progress quite quickly. They have constructed some seats as tests to make sure the reclaimed Class 117 first class frames fit a Derby interior properly and also made great progress in the cab which has original style controls and gauges.

Leigh
Posted by Leigh Gration at 17:57

Dear All,
It's been some time since I last had the pleasure of writing the daily report. This time I report to you as the Responsible Officer in my own right.
It would be easy to assume that because there was no train service today nothing happened on the Railway. I can assure you that this could not be further from the truth. Today Wirksworth yard was the scene of much activity.
In the shed 48624 group were cold rolling steel to for the Duke's boiler cladding rings. This was achieved by the ingenious use of a substantial home made rolling device. There also appeared to be some grinding taking place on the Duke's cab.
Further down the shed the DMU department were modifying seat frames for the first class compartment of the lightweight trailer car. Panelling fabrication was also being carried out for this vehicles cab. Nearby class 108 53599 had its corridor door trial fitted to much joyous success.
Another steam team duo were carrying out work on their new cabin amongst other jobs.
Not to be out done by all this the LMSCA were making seat bottoms and wall parts for BCK 27001 (Pictured). In the spirit of inter departmental cooperation they were also machining parts for the signal box at Shottle.
Across from there the Smith-Mason team were painting the floor of the cage area in their BSK.
A meeting of the HOPS team took place in the buffet.
A highly productive and satisfying day. Apologies if I have missed anything.
Regards,
John
_._,_._,_ 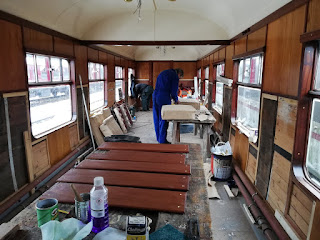 Dear all,
Can't believe we're over half way through January already, Christmas seems like ancient history!
It was the first day of really cold weather this winter but it didn't deter progress on a number of fronts. Most of it was down the line, with the PW team changing 6 sleepers in the Hazelwood vicinity as well as dealing with some accumulated brash.
The Shottle signalbox project is coming on leaps and bounds with the 4 steel legs for the box being installed today ready to eventually receive the box.
EVRAs SK returned from the Foxfield Railway today after spending the Christmas season on loan there. It is amazing to think that it wasn't in the too distant past that we didn't have any operational coaches so to loan one out and help another railway for a short time is great!
The Commercial Department were in full flow too working on new projects. More soon.
Leigh
Posted by Leigh Gration at 15:15

Another January day which saw small pockets of activity at Wirksworth. The Class 108 which has received corridor end repairs had the draw hook prepared for refitting and nearby, the earlier version (the original Derby Lightweight) had further interior work take place.

A group came to fettle the Class 14 with a good check over and short test run completed. A small power fault was thrown up so it was useful as it enabled that to get sorted out. Interestingly, the Class 14 being sold to industry by BR was what prematurely ended the production of the Rolls-Royce Steelman (like "LJ Breeze") as it was cheaper for private industry to buy these secondhand locos rather than buying new. The 14 is fitted with a Paxman engine although they did experiment with the Rolls-Royce DV8 (same engine as "LJ Breeze") in one example, this loco being preserved. The gearing in a Class 14 is useful in preservation as it enables them to comfortably handle passenger trains.

Leigh
Posted by Leigh Gration at 19:17 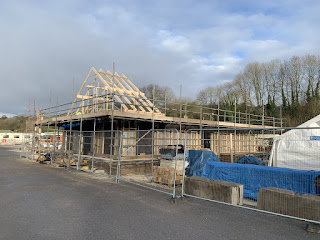 A chilly day in the valley saw vehicles in the yard positioned for upcoming work.

The PW team continued with their never-ending sleeper change quest in the Hazlewood vicinity too. The S&T dept cleared vegetation from around the site of where Shottle Signalbox will be so that it doesn't impose on the box once it is in position.

The first part of the new station building is coming along a treat with the roof sections starting to go together today. See photo.

Leigh
Posted by Leigh Gration at 16:47

Dear all,
A chilly but dry day enabled us to get down the remnants of Christmas. The decorations in the marquee were taken away and the Christmas tree on the platform removed. The Booking Office at Wirksworth also had the decorations put away into storage for another year.
In the engineerium, the corridor connection was forklifted on to one end of EVRA's TSO which is under restoration.
It certainly seems to be full steam ahead with the first third of the new building as contractors have been installing the beams to support the roof this week.  I wanted to take a photograph as some of the scaffold has been removed this afternoon but then realised it was dark.
Leigh
Posted by Leigh Gration at 15:32