Dear All,
It is said the sun always shines on the righteous and today our railway basked in glorious sunshine. The weather certainly brought out our visitors and the two car DMU set carried good passenger loadings throughout the day on the Duffield to Wirksworth service. Talking of DMU's the newly formed Ecclesbourne Valley Railway DMU Association held a meeting on platform one in the three car set to agree its constitution which was well attended.Down the yard John Ball conducted a training session on the new defibrillators which are now located at our main stations and in the guard's compartment on the service train. Following their meeting, the DMU team set about further investigating the enduring problem with Iris's brakes. The LMSCA were also in attendance.  Henry Ellison was in service on the incline with Joe and Andy playing hosts to two groups of visitors who had relatives participating in a footplate experience. Both sets of visitors had a very enjoyable day. We also played host to 'Look Busy Media'  who are producing a new promotional short film of the railway and special thanks goes to budding thespian Andy Denham who's footplate was his stage for a brief moment today. (photo attached). The miniature railway team were also out in force and the project is on track for their June opening. Todays service was supported by the Model Railway and EVRA  shop. Finally welcome to Chris our new Booking Hall Clerk at Wirksworth Station. I hope you have a long and rewarding time with us.
All the best, Tom
Sent on the move with my iPad Pro 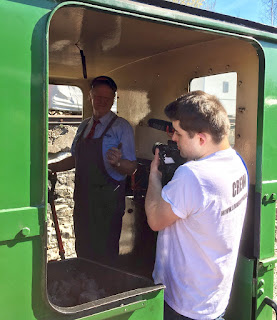