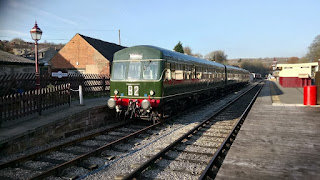 >
> Dear all,
>
> Today has been quite busy on the trains by November standards. There were 61 passengers on the first train and the good numbers continued thereafter. I think this shows how far things have come because, as mentioned previously, there was a time not too long ago when running after the clocks changed would have certainly resulted in empty trains. I travelled on the first return and there was a great atmosphere on board. A large family with small children sat behind and sang Christmas songs all the way back from Duffield. It just created a nice ambience on board.
>
> Down the yard, some bits were sorted out in the recently arrived Mk1 RBK in a bid to ensure that the vehicle is water tight. The steam team were working on The Duke and the LMSCA were in the Brake Third Open.
>
> Just one service day left before Christmas now, this Tuesday! After that we're in to the Santa season.
>
> Leigh
>
Posted by Leigh Gration at 17:47