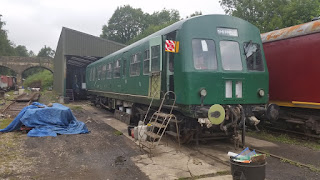 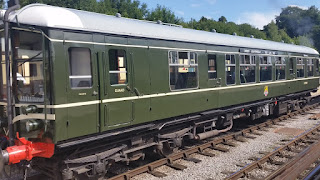 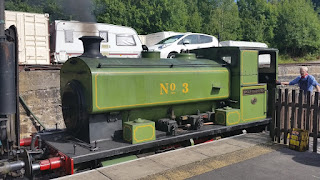 Today was one of those days when we all agreed first thing that it was going to be really quiet in view of the wide range of events and attractions happening in the locality. Someone was clearly listening in the signal box in the sky because from that point on the tills began to ring a pace and we closed proceedings with significant passenger loadings on our steam and diesel service throughout the day. What ever it is we do at our railway to attract visitors we clearly continue to do really rather well.

In the engineerium the DMU team concentrated their efforts on the restoration of unit 50253 which has not seen active service for around six years this being painfully evident when the oil filters were removed. She is being given what is referred to as an M exam which is simply described as…everything. Our engineers identified a timing issue with one of the engines meaning fuel was being injected too early, the engine would run but as you might imagine not very well. Once this and several other faults had been rectified,  in a playful moment engineer Ben was heard to say "very soon when I press this button this DMU will run" ..except he was interrupted half way through by…the DMU running! These guys really don't realize how good they are. Work was also progressed on the vestibule and headcode box and we look forward welcoming this new addition to our fleet in the foreseeable future.

The Wirksworth booking hall received some executive focus with two of our directors staffing it for the day and we thank Neil and Martin for stepping in at short notice. It was noted this afternoon that a party from Duffield had used our service to spend a weekend in Wirksworth and were returning home complete with luggage…all part of the service. The catering department were extremely busy as always and the gift shop reported brisk business later in the day.

A small group of young photographers and subjects in period dress and props were assisted at Wirksworth with their work. They seemed to be trying to frame the scene of a romantic farewell from the 1960's and your RO could be seen welling up with the emotion of the scene.

At our southern terminus we met a fascinating new visitor who had worked with and on Iris when she was in active service. He was in fact at Derby works when she was assigned a contract to the film the entire UK network. He explained in some detail the layout of the vehicle at the time complete with generators, seating areas and desks and had several stories of her antics such as being snow bound for several days, the history of the vehicle never ceases to fascinate and we hope we returns soon with more memories.

We welcomed Curt as a new volunteer to our ranks who underwent initial training and assessment which went extremely well and we look forward to him joining our team as a regular visitor in the future. This also allowed us to demonstrate the new induction process where John had already prepared inductions pack and joining documentation to complete. This really is a huge step forward in welcoming new staff to our railway.

On that note, as we approach the high summer months the number of visitors goes up at approximately the same rate as the number of volunteers goes down because by definition, everyone is on vacation. For those of you who use social media you will see we are starting a campaign to advertise for new volunteers and would appeal to you to consider recommending friends or family who may be interested in giving some of their time to our enterprise. Equally please continue to check the rota and volunteer your time over our busiest period for those roles for which you are qualified, as I type this is the evening summer sunshine June is already making plans for Santa specials…it will be here very quickly.

Finally, we welcomed engineer Jack back to the fold after a period away…fortunately John didn't spot him otherwise he may have been inducted….

Many thanks to everyone involved in another successful day...