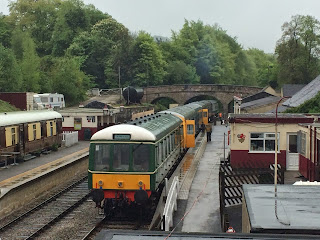 A damp day which featured a big shunt involving both LJ Breeze and 33035. The aim of the shunt was to position everything ready for the Big Bus and Train Bash on Saturday. The LMS TO was pulled out as the LMSCA are having a stall/display inside, the coaching stock was filed away and a six-car DMU set was constructed in anticipation.

Meanwhile, the Booking Office continued with preparations for the event including sign production and gazebo erection. It was nice to welcome Millside Radio, a hospital radio station who will be broadcasting live from the event on Saturday; they performed some test broadcasts via the 3G mobile network to their base in Mansfield. All successful and quite impressive!

The DMUs were all cleaned ready for their role too.

The PWay team had another day of great progress on the new pointwork, as did the VCT who have created a view now. One can stand on the platform and see through to the end of the line.

Today's photograph is the six-car DMU stabled up, with toilet filling, cleaning and general fettling going on.

Hope to see you Saturday!

Leigh
Posted by Leigh Gration at 18:57