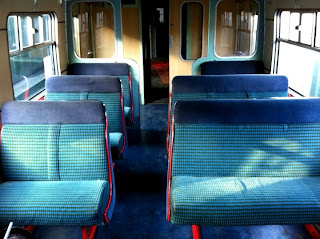 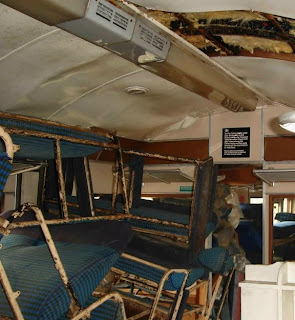 Having arrived post-haste from the deep South and other remote places, I
am pleasured to present today's report to you once again. Attached are
two pictures for your delectation. Img0236, taken today, is of the Met
Cam centre car with its newly fitted seats, half of these are now in
place and the other half will be ready in a very soon moment. The second
image, "DMU inside" demonstrates the slightly tired condition of certain
DMU vehicles which have formerly arrived at our famous establishment.
Meanwhile, the two car DMU set received its routine "A" examination.

Around the station and yard, the Duty Conscript, having learned his
lesson from last week, managed to keep his pants on while delivering a
large quantity of ballast in the direction of the planned picnic area
path. The fencing of the north end ramp of platform 3, to enable the
fortunate public to reach our charming picnic tables, was also dealt
with: only another 200 metres of fencing to go. The Rod and Mary show
proceeded with the painting of the platform shelter. The guerilla
gardeners were found to have planted a number of growing things on the
upper embankment and were also occupied laying out the vegetable garden.
The LMS brake van continued to have some of its parts ground off and
deposited in the skip.