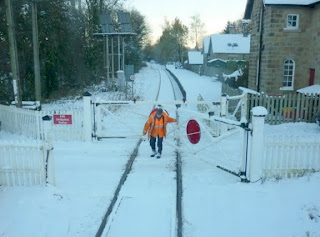 Today we mainly ate pies. At the start of the day, the temperature was
minus 12 at Idridgehay and by the end of the day it had risen to an
almost bucolic minus 9 at Wirksworth. The staff warmed their noodles on
the Mess Room radiators and defrosted their pies in the GLV microwaves,
only to have them re-freeze on the way back to the Mess Room. The locals
were found to be quietly skiing to the shops.

The principal thrust of the day was the repair of the cab windows in the
class 108, the only feasible work in such conditions, though the Duty
Conscript continued to clear the quad of snow and removed some man-sized
icicles from around the station. The weather took its toll of our
equipment and will staff please note that LJ Breeze is whores de combat
with a frozen reversing system which requires fitters attention. The
Mess Room pipes are frozen up and despite heroic efforts, heroic I say,
not all the washing up has been done. Water can be obtained from the
Booking Hall, where the heat generated by the till is keeping the pipes
clear. Staff were reported at Duffield and polar bears were apparently
eating the residents of Middleton.

The Mess Room cooker has also gone south for the winter, so if anyone is
disposing of their old one and replacing it with a new multi-million
pound B&Q kitchen, we may be interested in your old one (electric only,
hob and oven type needed). I can be contact on my direct email of
anton.shone@btconnect.com to save everyone the deep joy of a discussion
about cookers.