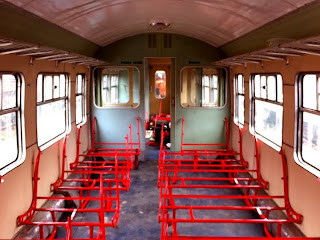 A rather chilly day in parts, with some of our parts being more chilly
than others. A host of activities occupied the many volunteers who
attended today. Starting at Duffield (for once), the entire and utter
staff of that station tidied up around the station office and moved
various items of brash and tat which had sadly accumulated there.
Meanwhile, the conscripts had arrived at Wirksworth and the word
"drains" was the first instruction issued, followed by "spades" and
"boots".

In the yard, the steam team, using the full power which the yard can
provide (having first turned the kettle off) welded parts of the boiler
of Henry Ellison as part of the restoration programme of that
locomotive. Also in the yard, Santa's Helpers (High Peak Division)
completed the major works on the Emporium de St Nicholas, and it also
looks very fine, with an especially fetching window, that Bob Cratchet
will be peering out of, come Christmas.

Around the Training Room, complete with its new step, the Global
Marketing Dept held a meeting to determine a cunning plan to take over
the world using the Bubble Car and a crack team of specially trained
dogs from Turnditch.

While this was taking place the Gat Ex Fitter (Bramson's Grease and
Tools Plc), addressed the droplights in the Buffet Car, which have been
known to give our guards back-strain trying to open them. In addition,
the reputed failure of the FO motor alternator set was traced to a loose
wire, with the full force of the railway's engineering skill having been
brought to bear upon it, and for which we are hopeful of a resolution in
a very soon moment.

The DMU team, being so populous as to have to split themselves into two,
firstly engaged in assorted repairs to the cab of the class 108 and then
assembled and arranged the recently arrived and newly painted seat
frames for the Met Cam centre car, and this is the subject of today's
picture, which shows them laid out ready to be bolted down: we hope to
be able to compare this picture to the finished product very shortly.