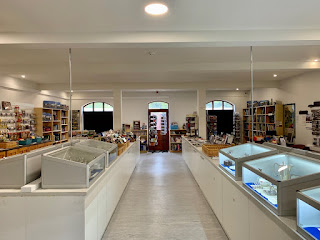 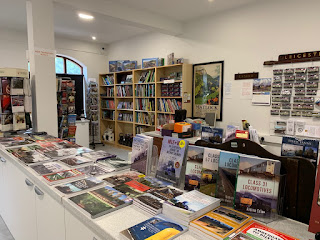 A relatively sedate day until late in the afternoon as we hosted a group who had chartered Iris for a trip to Ravenstor and then to Duffield, with hot drink refreshments too. The scheduled departure time was 16:00 however due to problems with their road transport we didn't manage to get underway until 17:30 so the trip turned out to be rather more twilight than expected. Thank you to the crew and catering who stayed later than expected, it was certainly appreciated by the group leader.

Down the yard, the Class 73 has many hoses renewed on the cooling system after it had developed several leaks. The contractor continued with the Maintenance Facility extension and the service train for the weekend was prepared.

Also apologies, as I forgot the Drive a Diesel experience yesterday in my haste! The most useful source of income.

I attach a couple of pics of the new museum/shop which is now open on operating days.

Leigh
Posted by Leigh Gration at 21:35